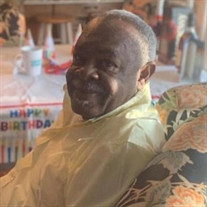 HUDDLESTON, Mr. George - Age 76, passed away Friday, July 9, 2021 at his residence. Family hour 10:00 AM Friday, July 16, 2021 at Second Friendship Missionary Baptist Church, G-6046 N. Clio Rd., with funeral service commencing at 11:00 AM. Interment Great Lakes National Cemetery, G-4200 Belford Rd., Holly, MI. Friends and pallbearers will assemble at the Church at 10:00AM Friday. Mr. Huddleston will lie in state in the Chapel of Lawrence E. Moon Funeral Home, 906 W. Flint Park Blvd., and may be viewed from 12:00 PM - 6:00 PM Thursday. George Len Huddleston or “Pookie Pie” whom his grandchildren called him, made his peaceful transition on July 9, 2021, with his family by his side. George was born in Mobile, Alabama on May 13, 1945 to the late Elbert and Vexie Jean Huddleston. He moved to Flint, Michigan in 1956. George attended Southwestern High School in Flint, MI. He married Betty Jean Bell on July 9, 1967. Together they had 2 sons, Lance Shurice and Chris Monta Huddleston. George served in the Vietnam War as a Medic. He received the Purple Heart and the Bronze Star with a “V”. When he returned from the War, he worked for General Motors. He later went into an apprenticeship program at Mott College to become a Journeyman Electrician for IBEW Local 948. He was one of the first African American’s to complete the program as a Journeyman Electrician. After many years of working for IBEW Local #948 and work became slow, he was forced to travel. George did not like leaving his wife and two (2) growing boys so he decided to return to General Motors as an electrician. George was a hard worker who always provided for his family and would give you the shirt off his back. He quietly made the world a better place with his smiles, jokes, and talks of about being an electrician. He loved talking about his experiences with his two sons, and his three (3) grandsons. He loved to see things grow in his garden, the Casino trips and was excited about being a great grandfather to Amir Prince Huddleston. George Len Huddleston leaves to cherish his memory: wife of 54 years, Betty Jean Bell Huddleston; two sons, Lance and Chris Huddleston; three grandsons, Lance II, Chris II, and Aiden Christian; two sisters, Cora and Lexane Huddleston; three brothers, James (Gwendolyn) Huddleston, Elbert Huddleston, all of Flint, Michigan and Jesse (Gloria) Huddleston of Ann Arbor, Michigan; four sisters-in-law, Dinah Stone, Dorothy Cunningham, Carolyn Roach, all of Columbia, SC, and Peggy Searles, Byrdene Bell, both of Augusta, Georgia, Ophelia Bell, Ridgeway, SC; three brothers-in law, Albert (Frances) Bell, Herbert (Mary Ann) Bell and Moses (Ruby) Bell; a host of nieces, nephews, cousins and friends. George was preceded in death by his mother, Vexie Huddleston; father, Elbert Huddleston; brother Willie Huddleston; and his sister, Dorothy Brock. A special acknowledgement to his Electrician brothers, Lee Lattimore, William Saines, Leroy Perkins, Charlie Clark; neighbors, Stanley and Ida Starling; friends, Mary and Liz and long-time special friend, Mary Buck.

The family of Mr. George Huddleston created this Life Tributes page to make it easy to share your memories.

Send flowers to the Huddleston family.