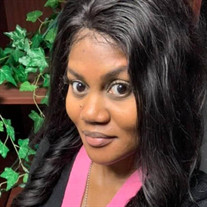 LEWIS, Dr. Gail LA'Shawn - Age 48, passed away Thursday, May 20, 2021 at McLaren-Flint. Family hour 10:30 AM Saturday, May 29, 2021 at New Jerusalem Full Gospel Baptist Church, 1035 E. Carpenter Rd., with funeral service commencing at 11:00 AM Pastor Patrick Sanders Sr., Host Pastor. After which Dr. Lewis will be taken to Combre Funeral Home, 1200 Mill St., Lake Charles, Louisiana. Interment Combre Memorial Park Cemetery. Friends and pallbearers will assemble at the church 10:30 AM Saturday. Dr. Lewis will lie in state in the Chapel of Lawrence E. Moon Funeral Home, 906 W. Flint Park Blvd., and may be viewed from 12:00 PM - 6:00 PM Friday. Dr. Gail Lashawn Lewis was, born August 12, 1972 in Flint, Michigan to her parents Willie Mae Bivins (formerly Lewis) and Morris C Lewis. Dr. Gail grew up attending New Zion Missionary Baptist Church.  In 1998, Gail reaffirmed her commitment to The Lord and joined and served in New Jerusalem Baptist Church, Flint MI and Messiah Missionary Baptist Church, Lake Charles, LA where she remained a member until her passing. Even though her official title was Dr. Gail Lewis, she liked to be called,” Dr. Gail” or “Gee Doc” (on social media). She was a graduate of the 1990 class of Flint Southwestern Academy in Flint, MI.  She attended the University of Michigan-Flint after graduation. There she was initiated into the Xi Chi Chapter of Alpha Kappa Alpha Sorority, Incorporated in December of 1991. Gail obtained her Bachelor of Science in Psychology in 1995. Gail loved to help people and started her career in non-profit management; however, her call to leadership was not satisfied there.  In 1999, She began a career with General Motors.  While she was employed with General Motors, she attended Keller Graduate School of Management earning her Master’s Degree in Human Resources in 2003, and her Doctorate in Management from University of Phoenix in 2007.  Dr. Gail was employed over 20 years with General Motors and was the Plant Manager of the Philadelphia Facility until her passing. She was actively involved in many organizations.  Gail served as the President of the Detroit Chapter of Apex. She was a life-member of Alpha Kappa Alpha Sorority, Incorporated.  During her twenty-nine year tenure with Alpha Kappa Alpha, she served in several membership positions.  Dr. Gail was the current president of the Ivy Legacy Foundation and a member of Rho Theta Omega Chapter in Philadelphia, PA. She was also an active member of the National Association of Parliamentarians. Gail loved to travel and has been to Dubai, Greece, The Bahamas, Montreal and Toronto Canada and every city within the United States that Alpha Kappa Alpha Sorority, Incorporated has held the biennial conference and/or Leadership Seminars since 2000.Dr. Gail was a certified professional coach. She was also an advisor, a consultant, a mentor, and a leader.  In her own words, “I fix people, places, and processes, #Change Agent.” She described herself well. She changed and impacted a lot of lives.  Those who have been blessed to share life and receive sound guidance about changing and attaining their dreams, she was the one that made the difference. In her words, “Can you honestly say that you are happy where you are or that you are doing the things that you want to do?  Or do you have moments where you doubt your dreams, yourself, and your abilities?  Or maybe you're just stuck - you know you want something different but don't know what that something is or how to get there. That's OK, it just means that you're ready for a change and I'm ready to help”. With all of Gail’s professional accomplishments, she was a loving daughter, grand-daughter, sister, aunt, and friend. Dr. Gail was preceded in death by her loving paternal grandparents, Calvin Lewis Sr., Thelma and Judge Allen; brother, Darryl Wayne Lewis; maternal grandmother, Chlotilde Mason; aunt, Hattie Davis; uncle, Willie Ed Mason, and a host of paternal & maternal family members. Dr. Gail Lashawn Lewis leaves to cherish her memory: mother, Willie Mae Bivins of Flint; father, Morris C. Lewis (Catherine) of Lake Charles, LA; paternal grandmother, Naomi Lewis of Texas; brothers, Roderick Lester of South Carolina, Edward Lewis of Georgia and Eddie Jones (Melanie) of Texas; sisters, Venus Greenfield (Min. Ronald) of Maryland, Nikita Simon (Thomas) of Louisiana and Deidre Cooper (David) of Georgia; uncles, Calvin Lewis Jr. of New York and Willie James (Tamara) Mason; aunts, Deidre Kelly of Texas, Annette Davis, Mae Austin and Gwendolyn Lockhart; and a host of aunts, uncles, nieces, nephews, great-nieces,  great-nephews and a great-great nephew; a host of cousins including very special cousins whom she grew up with; a host of other relatives, and friends. Her many Sorors of Alpha Kappa Alpha Sorority Incorporated, were very dear to her, especially sorors Dellisa Lewis, Martita Moffett-Page, the members of 1 L.O.V.E., and her adopted sister and dear friend, Candice Mercedes held a special place in her heart.

The family of Dr. Gail LA'Shawn Lewis created this Life Tributes page to make it easy to share your memories.

Send flowers to the Lewis family.