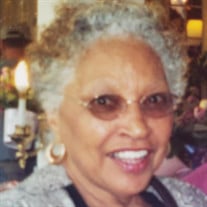 FREEMAN, Mrs. Frankie - Age 87, passed away Wednesday, May 18, 2022, at Hyde Park, Flushing, MI. Mrs. Freeman will lie in state in the Chapel of Lawrence E. Moon Funeral Home and may be viewed Friday, May 27, 2022, from 10:00 AM - 2:30 PM. Interment River Rest Cemetery, G-4413 Flushing Rd. Mrs. Frankie Jean Freeman “Frankie J” was born November 4, 1934 in Cincinnati, Ohio, the daughter of Grant and Anna Nuby. Mrs. Freeman was a resident of Flint, Michigan and passed away at Hyde Park Assisted Living in Flushing, MI. She was a member of New Jerusalem Full Gospel Baptist Church. Frankie was a resident of Flint for more than 60 years after she and her late husband, Stanley Freeman moved from Cincinnati, OH and started a family. Frankie graduated from Hurley School of Nursing in 1967, after graduation, she began working as a Registered Nurse at Hurley Medical Center (Hurley Hospital). She later gained employment at Chevrolet Manufacturing, a division of General Motors Corporation in the Medical Department where she worked as a RN up until the day she retired. Frankie was fierce, loved a challenge and had a smile that could light up a room. Mrs. Frankie Jean Freeman leaves to cherish her memory: daughter, Lisa (Marise) Tyler Sr. of Lithonia, GA; son, Jon K. (Teri) Freeman Sr. of Snellville, GA; 4 grandchildren, Kendre (Danta) Chapman, Jon K. Freeman Jr., all of Flint, Chantel (Wesley) Patton of Lansing, MI and Shontell Westbrook of Wynne, AR; 6 great-grandchildren; 4 great-great-grandchildren; a host of nieces, nephews, other relatives and friends. Mrs. Freeman was preceded in death by her, husband, Stanley Freeman; parents, Grant and Anna Nuby; sister, Beatrice Sisco; 2 brothers, Allen Nuby and Cecil Nuby. The family would like to express special thanks to Mahaley Freeman for being by our mother’s side until the very end. Also thanks to all of the staff at Hyde Park Assisted living and Elara Hospice Care staff who did all the God entrusted them to do while caring for “Ms. Frankie” and to Mrs. Mary Calloway “Aunt Mary” for providing spiritual support for Kevin and Lisa.

The family of Mrs. Frankie Jean Freeman created this Life Tributes page to make it easy to share your memories.

Send flowers to the Freeman family.