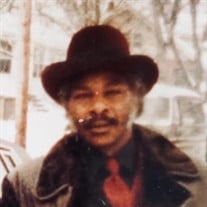 MOORE, Mr. Frank, Sr. - Age 88 passed away Monday, July 26, 2021 at his residence. Family hour 10:30 AM Tuesday, August 3, 2021 from the Chapel of Lawrence E. Moon Funeral Home, 906 W. Flint Park Blvd., with funeral service commencing at 11:00 AM, Pastor Ezra Tillman Jr., officiating. Interment Sunset Hills Cemetery, G-4413 Flushing Rd. Friends and pallbearers will assemble at the Funeral Home 10:30 AM Tuesday. Mr. Moore will lie in state in the Chapel of Lawrence E. Moon Funeral Home, and may be viewed from 12:00 PM--6:00 PM Monday. Mr. Frank Moore Sr. was born on August 11, 1932 to Telia and West Moore in Greenville, Mississippi. Frank grew up in Greenville and later married the love of his life, Mrs. Vernilla Moore on March 3, 1952. Shortly thereafter, they relocated to Flint, Michigan to begin their new life together. Frank began his career with General Motors Corporation of Flint, MI in 1953 and where he worked for 31½ years until his retirement from AC Spark Plug in 1985. Frank and Vernilla returned home to Greenville in 1986 to live out their retirement. Early on, Frank was a great baseball pitcher, playing in some of the same circuits as some of the Negro League greats. He even had offers to play semi-professional baseball out West, but declined so that he could be home to raise his children with his loving wife. Frank threw some really great parties on the weekends; filling his basement with fun and laughter and with great blues music playing in the background. Frank also became an outstanding pool player, and an even better golfer. He won many of the golf tournaments he competed in. Frank would also load up the family in his motor home and hit the highway for road trips to see family out of state or sometimes, just to take his grandchildren for a ride on the highway. He was the undisputed king of his castle; a heavyweight, as he would occasionally call himself in a wry manner. Frank was preceded in death by his wonderful wife of 69 years, Vernilla Moore; son, Willie James Nall; parents, Telia and West Moore; sisters, Julia “Doll”, Sarah, and Mildred; and brothers, Roosevelt, Clarence, David, Johnny, and Dan. Mr. Frank Moore Sr. leaves to cherish his wonderful memory: children, Lettie Bell of Pine Bluff, AR, Jeanette Grady and Frank (Jacqueline) Moore Jr., both of Flint; ten grandchildren, James Hairston, Rodney Green, Valerie (Daron) Rice, Michael (Tonya) Moore, Larry (Tamika) Cordell, Clifton Charleston, Dentson Moore, Fredrick Hall, Roy Moore and Frank Moore III; a host of great-grandchildren and great-great-grandchildren; sister, Mae Lee Honour of Greenville, MS; a host of nieces, nephews, godchildren, extended family and friends including a very special niece, Ms. Loretta Smith of Milwaukee, WI and very special friends, the Smith and Buggs families. The Family would like to express special thanks to: The staff of Kindred Hospice Care of Flint, Michigan as well as Dr. Sattar and staff for their compassionate care and support of our loved one. We would also like to thank Pastor Ezra L. Tillman, Jr. and the First Trinity Missionary Baptist Church Family as well as Pastor Alvin Bradford and Upper Room Missionary Baptist Church Family.

The family of Mr. Frank Moore Sr. created this Life Tributes page to make it easy to share your memories.

Send flowers to the Moore family.