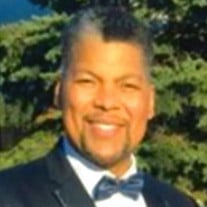 MARVE. Mr. Eugene - Age 60, passed away Monday, May 24, 2021 at Springdale Assisted Living in Swartz Creek, MI. Family hour 10:00 AM Friday, June 4, 2021 at Victorious Believers Ministries, 624 S. Outer Dr., Saginaw, MI 48601, with funeral service commencing at 11:00 AM, Pastor Christopher Pryor, officiating. Interment River Rest Cemetery, G-4413 Flushing Rd. Friends and pallbearers will assemble at the Church 10:00 AM Friday. Mr. Marve will lie in state in the Chapel of Lawrence E. Moon Funeral Home, 906 W. Flint Park Blvd, and may be viewed Thursday, from 12:00 PM-6:00 PM. Funeral service will be live streamed on YouTube: VBM Nation and on FaceBook: VBM-Victorious Believers Ministries Church of God In Christ. Mr. Eugene Raymond Marve transitioned to his heavenly home on a warm, beautiful, sunny Monday morning. He was born August 14, 1960 and departed into the arms of God on May 24, 2021. While we celebrate his heavenly transition, we mourn his earthly presence. Eugene was born to the late Robert H. Marve and the late Dorothy Blair, in the city he loved and called home Flint, MI. Eugene was raised in Flint and attended Flint public schools. He attended Garfield Elementary, Emerson Jr. High and graduated in 1978 from the GREAT Flint Northern. During his school years Eugene was an avid swimmer, were he lettered in swimming and weight lifting. Eugene went on to attend Saginaw Valley State College. He was Saginaw Valley State College’s first two-time All-American Football Player, to be drafted and play professionally. Eugene, aka Gene, played 11 years of Professional Football as a Linebacker on Defense. Eugene played 6 years for the Buffalo Bills (1982-87), 4 years for Tampa Bay Buccaneers (1988-91) and 1 year for San Diego Chargers (1992). He retired from the National Football League in 1992. After retiring, Eugene came back to his hometown Flint, MI to complete a lifelong goal of graduating from college at the now Saginaw Valley State University. Gene fulfilled his mission and graduated in 1995 with a Bachelors in Criminal Justice and a minor in Social Studies. Eugene loved nature, boating, fishing and gardening. He enjoyed working on his houses, riding his bike and motorcycle. He loved listening to all types of music and knew the words to almost every country song you can imagine. Gene had a great interest in watching and reading Civil War History movies and books. And just in case you didn’t know, he liked playing an old harmonica he found. Eugene was most proud of starting his own business in his beloved Flint at the age of 23 - Marve Rentals LLC. He began his business under the advisement of his father. He amassed over 60 properties and has been in business for over 30 years. Gene loved the Lord and he had a great reverence for the word of God. He was a faithful usher at Without Walls Church in Tampa, FL for 7 years. When he returned to Flint, he joined Victorious Believers Ministries under the leadership of Pastor Christopher V. Pryor but it was under the leadership and love of the late Bishop Marvin C. Pryor, that Eugene elevated his walk with Christ. Eugene served faithfully in the following ministries: Vice President of the senior usher board and assisted with the junior usher board; Men’s Ministry; Fine Arts Ministry and the Men’s Life group. He loved attending Sunday School and Wednesday night bible study. Gene especially loved participating in the men’s first Sunday 8:00 am prayer time. Eugene had an awesome ministry of witnessing everywhere he went and loved sharing his P’s for life: Proper Preparation Prevents Poor Performance. Eugene lived in a spirit of peace. He didn’t allow the outer circumstances of life to affect his inner peace and faith. Gene stayed in FAITH and believed God for his total healing. He thrived on LOVE, LAUGHTER, JOY, FAMILY AND FRIENDS! Playing professional football is what Eugene did but being a MIGHTY MAN OF GOD is who he was and through it all he NEVER LOST HIS PRAISE! Our dear Eugene leaves to treasure his memory, life and legacy: beloved wife, Stacey Pryor-Marve of Flint; his two children whom he loved and adored, favorite son, Robert Marve of Florida; favorite daughter, Rebecca (fiancé Glynn) Marve of Flint; siblings, Robert (Jackie) Marve III of New Orleans, LA, Eugenia Marve of Grand Rapids, MI, Michael (Rosalie) Marve. Jonathan Marve all of Flint, Randy Marve, Mechelle (Bill) Easley, Yolanda and Celeste Marve, all of California; favorite aunt, Mamie Coleman of Texas; mother-in-love, Linda Pryor; special and lifelong friends, Melvin (Sandra) Matthews of Bay City, MI, Latrelle Holmes, Joe (Kim) Hallem, all of Flint, Doug (Jane) Carastro of Florida, Curtis (Vanessa) Scott of North Carolina and Fred (Barbara) Littles of West Virginia; a beautiful circle of nephews, nieces, cousins, friends, family and his fur baby grandchildren, Jayda, Titus, Lillie, Layka and Winnie. Eugene was preceded in death by his parents, Robert Marve and Dorothy Blair; and Chloe & Rufus his Springer Spaniels. Eugene read and meditated on his favorite scripture Psalms 121 daily as it blessed and refreshed his soul.In the final words of Eugene R. Marve, signing off, Eye of the Tiger.

The family of Mr. Eugene Marve created this Life Tributes page to make it easy to share your memories.

Send flowers to the Marve family.