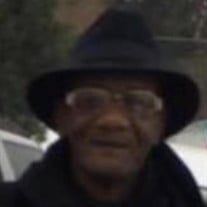 NEWHOUSE, Mr. Emmett Leon - Age 77, passed away Monday, February 21, 2022 at Maplewood Manor. Family hour 10:30 AM Wednesday, March 2, 2022 from Mt. Calvary Baptist Church, 4805 N. Saginaw St., with funeral service commencing at 11:00 AM. Rev. Dr. Henry Fuller, officiating. Interment Sunset Hills Cemetery, G-4413 Flushing Rd. Friends and pallbearers will assemble at the church 10:30 AM Wednesday. Mr. Newhouse will lie in state in the Chapel of Lawrence E. Moon Funeral Home, 906 W. Flint Park Blvd., and may be viewed from 12:00 PM - 6:00 PM Tuesday. On Monday, February 21, 2022, Emmett Leon Newhouse passed from this earth and entered into Heaven’s gate. As he looked in the face of God, our Heavenly Father greeted him saying” You fought a good fight, You‘ve run the race, You’ve finished your course.” As he looked around, he saw streets paved with gold and loved ones everywhere. To his left was his son, Tourice, who had been waiting for him since 1997. Standing with Tourice was his parents, Millard and Charlie Mae Newhouse and his beloved grandmothers, “Mama Mary’ and “Mama Clara” and to his right he looked and there were his siblings, Linda Height, Melvard and James Newhouse. As he turned from side to side there were numerous other aunts, uncles’ cousins and friends all waiting to greet him there. Emmett was born in Harrison County, Texas to Millard E. and Charlie Mae Newhouse. He was a graduate of H.B. Pemberton High School in Marshall, Texas. He continued his studies at the University of Arkansas Pine Bluff in Arkansas. In 1967, he relocated to Flint, Michigan where he began working for General Motors and was a member of UAW Local 599. In 1968, he married Carolyn Harris and to this union, two children were born, Madeline and Tourice. After 30 years, Emmett retired from General Motors in 1997. After retirement, Emmett opened Misty’s 50s Bar and Grill and ran it for over 10 years. Emmett served as a Mason and was a member of John W Stevenson Lodge 56. At an early age, Emmett united with Galilee Baptist Church in Hallsville, Texas under the leadership of Rev. John Madison. He later joined Mt. Calvary Missionary Baptist Church in Flint, MI. Emmett also played baseball with the Flint Allstars and was an all-around people person. He was quick to tell you about yourself but would give you the shirt off his back if he thought it would help. Emmet Leon Newhouse leaves to cherish his memory: daughter, Madeline (Fiancée Harold Hurt) Newhouse; grandchildren, Kiara (Reggie) Brown, Shartecia Anderson, Ronnie Jones and Tori Jones; 6 great-grandchildren; sister, Mildred Long of Houston Texas; brothers, Hollis (Debra) Newhouse of Flint, Winfred (Betty) Newhouse and Jesse Newhouse of Marshall Texas; sisters-in-law, Eula Newhouse of Flint, Lavida Barnes and Vernell Weathersby of Fort Worth Texas; aunts, Ollie Mae Ruffin of Flint, Doris King of Fresno, CA, and Lela Taylor of Dallas Texas; god-brothers, Eddie Ray (Barbara) Watson of Benton Harbor MI and Lawrence E. Moon of Flint; god-sister, Danetta (Carl) Dorsey of Longview Texas and Henryett “Peb” Porter of Marshall Texas; special sister-in-law, Likica (Billy) Williams; special niece, Nakeisha (Jibi) Smith; god-daughter, Tyra Hill; a host of nieces and nephews including special nephew, Dionte’ Craft and special nieces, Regina Long Harrison and Charlene Jones; a host of other relatives and friends including special friends, Willie Fields, Morris Peterson Sr, and Pat Quinn.

The family of Mr. Emmett Leon Newhouse created this Life Tributes page to make it easy to share your memories.

Send flowers to the Newhouse family.