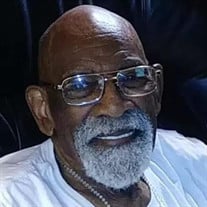 DUCKETT, Mr. Ellis -Age 89, passed away Tuesday, June 1, 2021 at his residence. Family hour 10:00AM Monday, June 7, 2021 at Lawrence E. Moon Funeral Home, 906 W. Flint Park Blvd., with funeral service commencing at 11:00AM. Interment Sunset Hills Cemetery, G-4413 Flushing Rd., Flint, MI. Friends and pallbearers will assemble at the funeral home 10:00AM Monday. Mr. Ellis Duckett was born in Texarkana, Texas, the son of Ellis Duckett Sr. and Augusta (Williams) Duckett. He graduated from Flint Northern High School, before attending Michigan State University. Ellis was a football legend in high school, college and in the Canadian Football League. A lover of education as far back as being a young boy, using a flashlight to read his favorite books, deep into the night. His athletic prowess allowed him to continue his education. After his football career he worked for General Motors and was a leader in the UAW. He returned to the classroom to earn his Masters Degree followed by a long career as an Elementary School Math Teacher with the Flint Community Schools. Few can teach Math by turning it into a sport. Family was most important to Ellis. He was known to many as “Brotha”. The youngest of four, he cared for his three older sisters, nieces and nephews. To his children he was ‘Da’ or ‘Pop’ and with his wife ‘Bern’ of nearly 50 years they created a loving home. He was kind, gentle, had the biggest heart, and a smile & laugh that could fill up a stadium. Mr. Ellis Duckett leaves to cherish his memory: daughter, Janeen (Edward) Duckett-Hall of Fort Worth, TX; sons, Dr. Bruce Duckett of Flint and Darrell “Duane” (Quayeria) Rushing of Flint; brother-in-law, Theopolis Poindexter; grandson he helped raise, Christian Duckett of Houston, TX, a host of other grandchildren, great-grandchildren, nieces, nephews, cousins and friends. Ellis was preceded in transition by: his wife, Bernadine J. Duckett; sons, Ellis Duckett III and Eric Bruce Duckett; parents, Augusta and Ellis Duckett Sr.; sisters, Olivia Brown, Susie Mae Skipper (Samuel), Lelia V. Poindexter and niece, Joyce Johnson. The family would like to express special thanks to Valley Area Agency on Aging, Right-at-Home and all of the extraordinary Aids who cared for Ellis Duckett so professionally and lovingly.

The family of Mr. Ellis Duckett created this Life Tributes page to make it easy to share your memories.

Send flowers to the Duckett family.