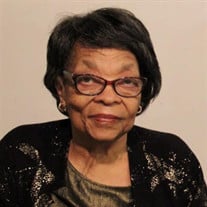 JONES, Mrs. Doriscene - Age 89, passed away Saturday, May 22, 2021 at her residence. Family hour 10:00AM Tuesday, June 1,2021 from the Chapel of Lawrence E. Moon Funeral Home, 906 W. Flint Park Blvd., with funeral service commencing at 11:00AM Elder Charles Richardson officiating. Interment Great Lakes National Cemetery, G-4200 Belford Rd. Friends and pallbearers will assemble at the funeral home at 10:00AM Tuesday. Doriscene Ross-Jones was born June 26, 1931, in Rison, Arkansas, the daughter of Genoa and Ed Ross, Sr. She attended Rison Schools and finished cosmetology school in Pine Bluff, Arkansas. Doriscene, affectionately known as Doris, had a great life as a young girl and often talked about her life in Rison with her mother and father. They were community-minded entrepreneurs who set an example for their children to lead a life of service. She followed her parents' example and was known as "The Penwood Road Mom" in the Beecher District because of her kindness and generosity regarding children in the neighborhood. In 1954 she married the love of her life, Candy Jones, Jr., and together they raised three children, Fred, Phyllis, and Benita. She loved her family with her whole heart. Her brothers, sisters, children, grandchildren, and every niece and nephew all knew she cared and was always honest enough to tell them the truth. Doriscene gave her life to Christ at an early age and loved attending her church, Greater Holy Temple Church of God In Christ, where she was a member for many years. As a licensed cosmetologist, she worked in her home kitchen, where many remember getting that signature press and curl. She loved crossword puzzles, writing poems, reading the dictionary and encyclopedia, and was always happy to share what she learned. She loved taking care of her family. Her love for music increased after her vascular dementia diagnosis, and amazingly, she became an even better piano player. Her sense of humor and quick-witted personality will never be forgotten. If you were around her, you were surrounded by truth, laughter, and love. She leaves to cherish her memory: husband of over 66 years, Candy Jones, Jr. of Mt. Morris, Michigan. Three children: Fred and his wife Kimberly Ross; Phyllis and her husband Larry Jackson; Benita and her husband Randy Seale, all residing in the Flint area. Six Grandchildren: Daria Ross; Damon and his wife Lori Ross, all residing in the Flint area; Dailaa and her husband Stephen Waldron of Clinton Township, Michigan; Dustin Ross of New York, New York; Dr. Lauren Seale of Southfield, Michigan; and Lydia Seale of Mount Morris Township, Michigan; Two Great Grandchildren: Saige Waldron and Devan Waldron; Sisters: Berthola Altheimer and Joann Jordan, both of Flint, Michigan; Sister-in-Law Lottie Ross of Flint, Michigan; a host of nieces and nephews and other relatives, including special adopted Grandchildren, Michael "Scooter" Derricks and Andrea Pringle. She was preceded in death by her parents, brothers: Ed Ross, Jr. and Otha Lee Ross; and sister Thelma Lathon. The Family would like to express special thanks to the nurses of Hurley 5 West and Dr. Rasha Nakhleh.Y' hat mourn: or they shall be comforted. "

The family of Mrs. Doriscene Jones created this Life Tributes page to make it easy to share your memories.