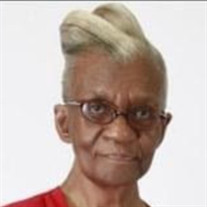 WHITE, Mrs. Deloris E. - Age 90, passed away Tuesday, January 25, 2022. Family hour 10:30 AM Tuesday, February 1, 2022 at Southeast Christian Church, 4171 Lapeer Rd., Burton, MI., with funeral service commencing at 11:00 AM, Pastor Kenneth Brown, officiating. Interment Great Lakes National Cemetery, G-4200 Belford Rd., Holly, MI. Friends and pallbearers will assemble at the Church, 10:30 AM Tuesday. Mrs. White will lie in state in the Chapel of Lawrence E. Moon Funeral Home, 906 W. Flint Park Blvd., and may be viewed from 12:00 PM-6:00 PM Monday. Occupying this physical body finally came to an end for Mother Deloris Eloise White as agony has now ended and pain has taken its flight! It was on Monday, January 24, 2022 when our Lord and Savior summoned Mother Deloris Elouise White (AKA Jane) to join the “great cloud of witnesses” that rest in Him! As realize, nothing rekindles memories like a trip down memory lane! It was June 11, 1931 when Deloris made her earthly entrance in Lexington, Kentucky. She was the only child to parents, Collie and Grace Portis! When 6 years old, she & her family moved to Flint, Michigan and became members at the “Mother Church,” Bethlehem Temple (our ‘old stomping ground)! The landmark was at 918 Spencer Street and is now located at 3401 Dr. Martin Luther King, Jr. Avenue, Flint!  She was buried in the watery grave in Jesus’ Name as a lass! Five days later, she received the gift of the Holy Ghost! There, she came under the leadership of Eld. J. W. Childs; Bishop (then Eld.) Frank R. Bowdan and Dr. B. T. Scott (all deceased). Later years, she joined Southeast Christian Church under the auspices of the late Dist. Eld. John A. Brown! After his demise, Dist. Eld. Kenneth M. Brown, Sr. was her overseer! Steadfast and always abounding in the work of the Lord, she was saved for 80 plus years! She attended the Flint Community Schools and graduated from Northern High. Subsequently, she was gainfully employed for 19 years at McLaren General Hospital! It was in the early 1950’s when she met a joyful discovery—a gentleman...dedicated worker...her future husband, Bro. Major White! After the dating phase, they were married and reverenced with 62 years of togetherness before he passed! They were also blessed with 6 children and a host of grandchildren and great grandchildren—a four-living generation! Although Jane (as respectfully called by those who were close to her) was reserved, direct & had a serious look (at times), she was loving, funny, feisty, stylish, talkative and extremely patience! Again, she knew how to put a smile on one’s face and disarm sadness—accurately, thoroughly and with a human touch! Moreover, she could entertain & amaze one from her stories, experiences & testimonies of yesteryear! Yes, much had changed during this centenarian’s lifetime, but one thing many people know is that she was consistent with her love for God, family; the church and mankind! As stated prior, her love, life & longing were the House of God! She entered and exited its doors for almost nine decades! Realizing that time is a precious commodity, she utilized it to the fullest extent: She was a devoted Sunday School teacher, usher & choir member. Likewise, she was involved in the Missionary Department, Christmas and Easter Programs as well as other functions in and outside the church walls! Befriending faithfulness, she unquestionably had a way of coming in with kindness and leaving smiles behind! Help making others happy seem to be her aim...often without realizing it...simply giving her best! Among her true loves were taking up time with her family; cooking, sewing and coloring pictures! Surely, she could attest from looking at her own-aging hands that they were given to stretch out to all those who suffered pain, heartaches, disappointments; to rest upon the shoulders of those who need consolation; for embracing and rejoicing with loved-ones who accomplished a goal! Those same hands had worked tirelessly in maintaining her home; used at her place of employment; to cook scrumptious meals; pray for the ill/confined and to elevate them upon High for the blessings that emerged from the immensity of God’s love! Truly, she was attentive to many people without regrets or restraints! Being amid the “silver threads,” wisdom warriors, perhaps better known as seniors, she was lauded for her 90th Birthday Celebration on June 11, 2021! That momentous occasion is unforgettable with cherished and fond remembrances! A “servant in the shadow,” she had never had the passion to be seen and approved for her efforts! But, she gave continuously and freely, in her quiet but sincere manner, and left the results for the Master to reward her! The time was Monday, January 24, 2022, at approximately 6:00 a.m. when the Lord Jesus Christ summoned Mother White to take her last breath for another dimension! Her lips are now sealed in death and such loss has caused a magnitude of sadness and hurt! However, the depth of sorrow and despite how death stalks us, the resurrection is inevitable of a future of immeasurable good! Mrs. Deloris Elouise White leaves in God’s care and to treasure and reminisce her life: Her admired daughters, Stephanie Sampson and Regina (Roland) Young; and endeared sons: Zackery White, Cleophas White and Jonathan White; grandchildren, Sandra White, Cleophas White, II; Kenny White; Karanja White, Whitney (Isaac) White; Larekha Murray, Tenisha Miller, Monique Rodgers and Raejene Rodgers; great-grandchildren, Jada S. Wickware; Larry K. Wickware, III; Dior Partee, SaNya White, Kenneth White, Jr., Ariana White, Chase White, Nakyijah White; Korea White; Kamari White, Dayo Omari, Desu Omari; Adrian Murray, Caleb Rodgers, Tristen Rodgers, Gabrielle, Lipken; Ajai Lipken and Leah Lipken; a host of other relatives and friends including Goddaughter, Dawn Michele Toins; Special friends: Kenya Purcell, Viola Massey, Floretta Perry, Jenny Brown, Cherrie Williams and Betty J. Edmonds! Mrs. White was preceded in death by her loving and faithful husband, Major White; caring son, Timothy White, devoted granddaughter, Tekisa Gibson and highly-regarded friends, Barbara Hicks, and the late Bishop Edward C. Roberts of Flint and Charlotte, N. C. respectively!

The family of Mrs. Deloris Elouise White created this Life Tributes page to make it easy to share your memories.

Send flowers to the White family.