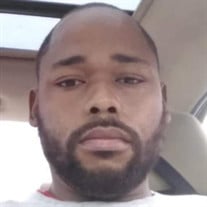 JONES, Mr. Curtis Cleveland III - Age 34, passed away Saturday, May 1, 2021 at his residence. Family Hour 4:30 PM Saturday, May 8, 2021 from the Chapel of Lawrence E. Moon Funeral Home, 906, W. Flint Park Blvd., with funeral service commencing at 5:00 PM. Family and friends will assemble at the funeral home 4:30 PM Saturday. Mr. Jones will lie in state in the Chapel of Lawrence E. Moon Funeral Home and may be viewed from 12:00 PM - 6:00 PM Friday. Mr. Curtis “Curt” Cleveland Jones III was called to rest on May 1, 2021. Curtis was born May 12, 1986 in Ann Arbor, Michigan, the son of Cornelia Monroe and Curtis “Bucky” Jones Jr. Curt was an avid lover of music, cars and cooking. His musical journey began with beating on pots and pans with a spoon as a toddler, becoming a member of the Kuungana African Drum and Dance Troop under the direction of Kevin Collins while attending Neithercut Elementary School. Curtis continued to further his love of music, and learned how to play the Tuba, Trumpet and Bass Guitar. After graduating from Flint Central High School in 2004. He went on to attend Fisk University, and was initiated into the Brotherhood of Phi Mu Alpha Sinfonia Fraternity Zeta Rho Chapter in 2005. Curt also played with the Vanderbilt University Marching Band during the 2004-2005 football season. Through his love of cars, he gained infinite knowledge and anyone who knew Curt and, was contemplating buying a car would come to him for advice. His love for cooking genetically flowed through his veins stemming from his great-grandmother, grandmother and Mom. These loves were superseded only by the greatest accomplishment of his life, being a father to his daughter, Braylin Monroe Jones. She was truly the apple of his eye and “daddy’s little girl”. Curt was preceded in death by his grandparents, Ellistene Jones, Corneilus & Robenia (Hilris) Monroe; and dear aunts & uncles. Mr. Curtis “Curt” Cleveland Jones III leaves to cherish his memory: mom & dad, Cornelia Monroe and Curtis “Bucky” Jones Jr.; daughter, Braylin Monroe Jones; sister, Nicole Jones; brother Duane Jones; special cousins, Takara, Danyelle, Kent, Corey, Erika and many others; uncle, Henry Lane; lifelong friends, Elliot McCants and college roommate, Quincy Winston; and a host of dear aunts, cousins and friends. The family would like to express special thanks to Dr. Roome of Hamilton Community Health Clinic

The family of Mr. Curtis Cleveland Jones III created this Life Tributes page to make it easy to share your memories.