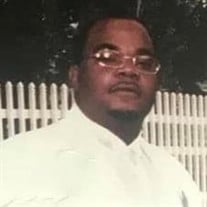 WILLIAMS, Mr. Christopher DeRodrick -Age 42 passed away Thursday, February 10, 2022, at his residence. Family hour 1:30 PM Friday, February 25, 2022, from the Chapel of Lawrence E. Moon Funeral Home, 906 W. Flint Park Blvd., with funeral service commencing at 2:00 PM Pastor Moses Bingham officiating. Interment Sunset Hills Cemetery, G-4413 Flushing Rd. Friends and pallbearers will assemble at the funeral home 1:30 PM Friday. Mr. Williams will lie in state in the Chapel of Lawrence e. Moon Funeral Home and may be viewed from 12:00 PM - 6:00 PM Thursday. Christopher DeRodrick Williams was born December 24, 1979, the son of Rosemary Dean and Roderick Williams in Flint, MI where he was raised. Chris was a loving, compassionate and caring son, brother, uncle, cousin, and friend. His infectious smile, sense of humor and personality is what captured the hearts of many who knew him.  He attended Flint Community Schools-Civic Park Elementary, Longfellow Middle School, and graduated from  Northern High School, “Class of ‘98”.  Chris later went on to attend Mott Community College in Flint, MI where he excelled in Math and Science. He was previously employed at Meijer and General Motors in Flint, Michigan. In 1996, he was given a Proclamation for his heroic deed and leadership, along with 2 other childhood friends by the City of Flint Mayor Woodrow Stanley including a plaque by the Flint City Council after rescuing an unattended and wandering child in the community. Chris was always looking out for others and willing to help anyway he could. He loved fashion and getting “fly” with his collectable colognes, hats, sneakers, and watches.  Including hobbies such as rapping, music and writing songs for himself and others. Watching judge shows, Law & Order and talking about everything from everyday life to politics with friends was some of his favorite things to do. But most importantly he took pride in his neighborhood block affectionately known as “the circle” where he formed a group of friends that lasted a lifetime. He enjoyed kicking it with friends in “the basement” a spot in his house where everyone came to enjoy music, card games, good conversation and laughs. Chris was truly a great friend and confidante to many. Christopher DeRodrick Williams leaves to cherish his loving father, Rodrick Williams of Flint, MI; and brother Nicholas Dean. Nephews and nieces, Paris Dean, Kai Washington, Lauren Hampton, Kamille Dean, Kansas Dean, Christopher Dean, Eian Dean, and Xavier Berry. Uncles and aunts Bennie Williams, Kim (Jimmie) Whitaker, Betty (Leroy) Smith Jr., Rebecca (David) Carter and many other relatives. Special friends include, Pasha Chaney, Quentin Wilson, Moses Bingham, KaRon Brown, Terry Brown, Rashad St. Clair, Michael Clack, Sparkle Harris, Bobby Idom, Deandre Bates, D’Anta Darrough, Jeffrey Johnson, and Aarondre Kemp-Hamm. Christopher was preceded in death by his mother, Rosemary Williams; uncles, Emerson Dean, Fletcher Dean, Jr., and Michael Dean; aunt, Mattie Miller; and grandparents, Fletcher and Alice Dean and Bennie and Vivian Williams. The family wishes to extend a special thanks to best friend, Quentin Wilson; sister-in-law, Kori Carson Dean; cousin, Tara Taylor; Hurley Medical Center; Lawrence E. Moon Funeral Home; and host of family and friends for all their help, prayers, and support.

The family of Mr. Christopher DeRodrick Williams created this Life Tributes page to make it easy to share your memories.