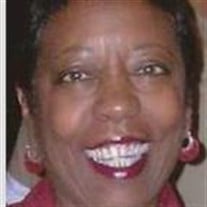 FIELDS-PRICE, Mrs. Carolyn - Age 77, passed away Friday, January 28, 2022, at Delray Medical Center in Delray Beach, FL Family hour 10:30 Friday, February 11, 2022, from the Chapel of Lawrence E. Moon Funeral Home, 906 W. Flint Park Blvd., with funeral service commencing at 11:00 AM. Interment Evergreen Cemetery, G-3415 E. Hill Rd., Grand Blanc, MI. Friends and pallbearers will assemble at the funeral home 10:30 AM Friday. Mrs. Price will lie in state in the Chapel of Lawrence E. Moon Funeral Home and may be viewed from 8:00 AM Friday until time of service. Mrs. Carolyn Jean Fields-Price was born in Kansas City, Kansas on January 30, 1944, the daughter of Ruth Williams (Joseph)-Fields. She preceded in life by one sister Christine Field-Branch. In pursuit of her professional career, Ruth relocated her family to Toledo, Ohio where Carolyn, Christine and Victor spent their formative years. Carolyn & Samuel were high school sweethearts and married in 1962 at the University of Illinois, in Champaign, Illinois, where Sam achieved his bachelor degree and both were blessed with the birth of a son, Kevin Lee Price April 7, 1963. The two persisted with family life all while Sam continued to hone in and incorporated his exceptional athletic football & track career from their high school days through his professional NFL career with the Miami Dolphins. Carolyn and Sam had high expectations and grew their talents into multiple business opportunities that span from Miami, Florida to Grand Blanc (Flint), Michigan from Carolyn’s Educational & Management skills to Sam’s Restaurants, Automotive and Real Estate. Their social interactions over three decades as Michiganders grew in success to the applauds of many that knew their love for each other over the 60 years of their combined ambitions and stature that manifested in Carolyn and Sam’s love affair. Let God’s hands continue to bless her in the here-after and forever and ever. Education was an important element in Carolyn’s life. Carolyn was the first of her siblings to graduate from College and set standard for the family. Between 1967 and 1975 she attained an Undergraduate Degree in Social Work from Florida Memorial College and Master’s Degree in Library Science from Wayne State University with commensurate work contributions in both fields. Carolyn went on to become a Senior Librarian at the Flint Public Library – a position she held for over 25 years. Not content with a passive retirement, after decades of community service, but much like her mother’s ambitions to seek a higher professional career, Carolyn convinced Sam in 1997 to relocated to San Diego, California. Upon relocating both continued to grow and Carolyn’s talents expanded to capture the attentions of the County officials that saw her decades of Public service in Michigan could be transformational with her expertise in leading the expansion of the San Diego County’s Public Defenders Library operations. Carolyn’s skill sets grew a single source Library facility into a County expansion that incorporated the development of multiple branches throughout the San Diego County. Serving the legal community and those that sought equal treatment through the Judicial systems of California. As a concluding career accomplishment Carolyn was recognized by the United States Library of Congress in Washington, D.C. in 2006. Carolyn’s achievements for over four decades of professionalism and educational contributions as a scholar and Liberian that enhanced thousands of lives and today sets the standards that will long living her work to mankind. Carolyn’s life was full and well lived – she leaves behind: husband, Sam L. Price of Wellington, FL; son, Kevin L. (Cassandra) Price of Nassau, Bahamas; granddaughter, Sophie Lee Price of Athens, GA; brother, Victor F. (Alma) Russell of Dallas TX; 3 nieces, Debbie Branch of Rochester, NY, DeLisa (Michael) Nealy of Oakland, CA, preceded in life by niece, Denise Branch; 2 nephews, Daniel V. Russell of Dallas, TX; Christopher J. (Nicole) Russell of Denver, CO; three grandnieces, Alanna Branch, Gia Nealy, both of San Francisco, CA, and Maliyah Rose Russell of Denver, CO; two grandnephews, Andrew Nealy and Weston Nealy, both of San Francisco, CA; a host of cousins and extended family members and friends. Her exceptional accomplishments exemplified a standard for all to achieve.

The family of Mrs. Carolyn Fields-Price created this Life Tributes page to make it easy to share your memories.

Send flowers to the Fields-Price family.