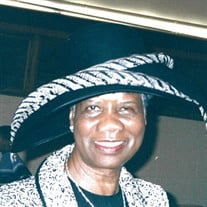 STRAHAM, Mother Bessie Helen - Age 82, passed away Sunday, November 14, 2021 at Ascension Genesys Hospital in Grand Blanc, Michigan. Family hour 10:30 AM Monday, November 22, 2021 from the Chapel of Lawrence E. Moon Funeral Home, 906 W. Flint Park Blvd., with funeral service commencing at 11:00 AM, Pastor Douglas Banks, officiating. Interment Sunset Hills Cemetery, G-4413 Flushing Rd. Friends and pallbearers will assemble at the Funeral Home, 10:30 AM Monday. Mother Straham will lie in state in the Chapel of Lawrence E. Moon Funeral Home and may be viewed from 10:00 AM- 4:00 PM Sunday. The Flint Alumnae Chapter of Delta Sigma Theta Sorority, Incorporated will hold a virtual Omega Omega ceremony in celebration of the life of Bessie Straham. The ceremony will be held Saturday, November 27, 2021 at 10am. If you are interested in attending please contact the chapter at [email protected] Mother Bessie Helen Lambert Straham, 82, went to meet her Lord and Savior, Jesus Christ, November 14, 2021. She was born July 19, 1939 in Warren, Arkansas to the Late George and Elvira Lambert. She was the 8th child born to this union. Bessie accepted and professed Christ at an early age and united with Bethel AME Church in Warren, Arkansas. Bessie’s early education was in Warren, AR. She graduated from the University of Arkansas at Pine Bluff (AM&N) with a B.A. in History. She later received her Master’s Degree from the University of Michigan. Bessie married the love of her life, the late Clarence C. Straham Sr. in 1968 in Pine Bluff, Arkansas. They relocated to Flint, Michigan and united with the Vernon Chapel A.M.E. Church, under the leadership of Rev. Rueben Russell, where she served faithfully for 53 years. Her positions included, but were not limited to Christian Education Director, Church School Superintendent, Member and Worship Leader of the Cook Missionary Society, Member of the Lay Department, and Senor Choir. Her greatest achievement was being consecrated Deaconess, the ONLY life time appointment in the A.M.E. Church. Mother Straham was a Christian, wife, mother, sister, mentor, citizen and friend who worked diligently to make this world a better place.  Throughout her life, she was a human rights advocate and the personification of benevolence.  Bessie, a gifted communicator who could walk and talk with kings and queens and yet not lose her common touch, was the consummate understander, “NOW WHAT I AM HEARING YOU SAY IS …”, she always wanted the “MESSAGE INTENDED TO BE THE MESSAGE RECEIVED”.  She was forever training, ‘the next generation’, because in order to continue and sustain we must “train the next generation to take our place in various positions or offices”.  Her favorite phase to end the morning announcements to her students was “It takes only one second to get into trouble, BUT it could take your life or a lifetime to get out of it.” Because of her curiosity, her vivid imagination, her nature, and her cosmopolitan interests, Bessie broke through many barriers and glass ceilings set for women, including becoming the first woman in the history of the Flint community School District to serve as a High School Principal, thereby paving the way for other women to attain this level of achievement. Her dedication and direction for service was further exemplified through her Life Memberships in:  Delta Sigma Theta, Inc., University of Arkansas Pine Bluff Alumni Association, National Association for the Advancement of Colored People and Michigan Association For Secondary School Principals.  Among all of her noteworthy accolades, Bessie Helen Lambert Straham was named “Arkansas Traveler” which is an Ambassador for the State. An honor that is bestowed by the Governor. One of Bessie’s last achievements was becoming a published author. Her book “The People’s Perception Of Bessie Helen Lambert Straham: A Miracle on Barrington Drive” was recently published. Bessie Helen Lambert Straham departed this life on Sunday, November 14, 2021. Left to cherish her memories are son, Clarence C. (Carlotta) Straham Jr., daughter, Cynthia G. Straham (Harold) Evans; five grandchildren, Diamond D. (Nathan) Clayborn, H. Leland Evans II, Clarence C. Straham III, L. Elizabeth Straham and Joshua R. Evans, all of Little Rock, AR; three great-grandchildren, Nathan L. Clayborn III of Little Rock, AR, Mila Giatras of Edwards, CO and Kellan E. Evans, of Little Rock, AR; brother, Arthur (Vivian) Lambert, of Little Rock, AR; four sisters-In-law, Bobby (Amir) Houshiar of Saginaw, MI, Mamie Straham, Lenora Straham, and Nisha Straham, all of Flint, MI; brother-in-law, Sherman Straham of Flint, MI; aunt, Lennie B. Straham of Flint, MI; spiritual daughter, Tara L. Miller; spiritual granddaughter, Cameo Paschal-Fair; three godchildren, Deron Walker, E. Isaiah Leavy and Leah R. Dunlap, all of Flint, MI; and a host of nephews, nieces, other relatives, students and dear friends. Mother Straham was preceded in death by her husband, Clarence C. Straham Sr.; parents, George and Elvira Lambert; four brothers, Jakie Lambert, Robert Lambert, Charles Lambert and Otis Lambert; three sisters, Margaret Nunley, Ollie Robinson and Beretha Jamison.

The family of Mother Bessie Helen Straham created this Life Tributes page to make it easy to share your memories.

Send flowers to the Straham family.