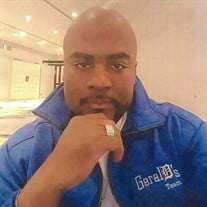 CHEATHAMS, Mr. Anthony - Age 44, passed away Saturday, May 8, 2021 at McLaren-Flint. Family hour 10:30AM Friday, May 21, 2021 from the Lawrence E. Moon Funeral Home, 906 W. Flint Park Blvd., with funeral service commencing at 11:00 AM. Rev. Rodney Ellison, officiating. Interment Flint Memorial Park, G-9506 North Dort Hwy., Mt. Morris, MI. Friends and pallbearers will assemble at the Funeral Home 10:30 AM Friday. Mr. Cheathams will lie in state in the Chapel of Lawrence E. Moon Funeral Home from 12:00 PM-6:00 PM Thursday. Mr. Anthony Cheathams Sr. was born March 11, 1977 in Flint, Michigan, the son of Sarnia Jackson and the late Jerry Cheathams. He was a member of Mt. Zion Missionary Baptist Church and accepted Christ at an early age. Mr. Cheathams was hired by the Delphi  Corporation as an hourly employee of Delphi Flint East in 2006. Anthony remained a dedicated employee during the plants ownership transition from the Delphi Corporation to the General Motors Corporation where he later worked at the Davison Road Service Parts Operations (SPO) Plant; which is currently known as (CCA) Customer Cares & After Sales. After working amongst the workforce on the plant floor, in 2008 Mr. Cheathams was elected by his colleagues and co-workers to the position of Alternate Committee Union Representative; a position he loved and served well. In 2010, he ascended to the position of Full Time Committee Representative where he represented his co-workers with distinction and honor. After a short time, Anthony was elected by the workers of all Districts and shifts of his plant to serve as Chairman of Local #651, a prominent role in which he served as the leader of the workforce, the chief representative agent, advocate, and mentor to many. Anthony was also respected by members of the management team for his professionalisms and the work he did to support the securing and building of the new more than 1.2 million square foot building that his membership calls their home plant. Anthony went on to lead negotiations on behalf of the members of Local 651 for countless local negotiations ultimately winning language that would provide for working conditions that would best serve the workers and the plant as a whole. Because of his stellar leadership and as a result of the confidence his membership had in him as their leader, he ran unopposed in his next three consecutive elections and as a result he went on to serve for three additional terms as Chairman of the Largest CCA Plant in the country. Nationally he was known as one who was never afraid to speak truth to power as he was committed to representing the best interest of his membership with grace, dignity and integrity. As a result, in 2015 he was elected by union leaders from across the country as Negotiator for the 2015 National General Motors Contract Negotiations and in 2019 he was re-elected to serve as Lead Negotiator representing the UAW and the entire  National workforce of CCA during the 2019 National GM Negotiations. He was both admired and respected by local, national and international representatives of both the General Motors Corporation and the United Auto Workers Union, UAW. He changed thousands of lives and ensured that his members remained gainfully employed, safe and that they were treated with dignity and respect. He was a leader amongst leaders, a friend of all friends and one who was amongst the greatest Local union leaders of this generation. Mr. Cheathams loved to spend time with his children who he adored and interacting with his family and friends. He also loved to dance, play dominoes and sing. Most importantly above all he loved God with his whole heart just as he knew that God always loved him back. Mr. Anthony Cheathams Sr. leaves to cherish his memory: special friend, Carrie Taylor; 3 daughters, Alesea Cheathams, Aireona Grear and Mariyah Nichols; 2 sons, Anthony Cheathams Jr. and Jermain Taylor; mother, Sarnia (Harris) McNeal; 2 sisters, Marietta Payton and Erica Cheathams; brother, Derrick Cheathams; 2 nieces, Lamyia Thomas and Cordasia Jones; 5 nephews, Demond, Chace, Jewell, LaCord Jr. and Jayden; 7 aunts, Ressie Kline of Flint, Vergia Miskel of Muskegon, MI, Stephanie Jackson of Flint, Nevelle (Clayton) Pirtle of Clarkston, MI, Catherine (Malcolm) Alexander of San Diego, CA, Mary Wicks and Valerie Cosby; 4 uncles, Wendal Payton, Roscoe Payton, Matthew Payton, all of Flint, Bernard Payton of Columbus, OH and Chester Payton of Sodus, NY; a host of cousins including 7 special cousins, Wonetha Hall of Tampa, FL, Kamilah Alexander Jesse Jackson, both of San Diego, CA, Jeremy Jackson, Pricilla Cheathams, Michael Cheathams, Shawn Payton and Tikisha Kline, all of Flint; 2 brothers-in-law, LaCord Jones and JD Thomas; a host of other relatives and friends including special friends, Day One Family, Leroy, Maurice S., William, Quez, Ty, Sonny, KP, Christina, Eric and R-Sin. Mr. Cheathams was preceded in death by his father, Jerry Cheathams; mother, Teressa Payton; grandparents, Robert L. and Rubbie Jackson, Odis Cheathams, Ann Walker, Rev. Chester and Eloise Payton, Ressie Boxsteele; sister, Shaketha Cheathams; brother, Cortez Cheathams; aunts, Alisha Bodary, Mary and Dorthy Cheathams; uncles, Ted Cheathams, Terry Cheathams, Odis Cheathams Jr. and Robert Jackson Jr. The family would like to express special thanks to McLaren-Flint, Rising Star Missionary Baptist Church family and friends, UAW International, GM UAW Local #651 and Mt. Zion Missionary Baptist Church family.

The family of Mr. Anthony Cheathams created this Life Tributes page to make it easy to share your memories.

Send flowers to the Cheathams family.