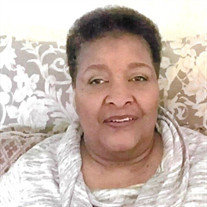 WINTERS, Mrs. Albirtha - Age 78, passed away Wednesday, April 27, 2022 at Ascension Genesys, Grand Blanc, MI. Family hour 10:30 AM Wednesday, May 4, 2022 at St. Paul Missionary Baptist Church, 2115 Coldwater Rd., with funeral service commencing at 11:00 AM Pastor Michael Pettigrew officiating. Interment Flint Memorial Park, G-9506 N. Dort Hwy, Mt. Morris, MI. Friends and pallbearers will assemble at the Church 10:30 AM Wednesday. Mrs. Winters will lie in state in the Chapel of Lawrence E. Moon Funeral Home, 906 W. Flint Park Blvd., and may be viewed from 1:00 PM-6:00 PM Tuesday. Mrs. Albirtha Winters was born October 12, 1943 in Leland, Mississippi, the daughter of the late Richard and Odessa Smith. Albirtha attended Briesh High School and later graduated from Flint Central High School. In 2010, she retired from Alternative Services where she was employed for over 20 years. She loved the Lord and was a devoted member of St. Paul Missionary Baptist Church where she served on the Usher Board until her health would no longer allow her to. Albirtha was big on family, she was an amazing mother, exceptioinal grandmother, and a wonderful great-grandmother. She was the kind of woman that would do all that she could for those that she loved and she tried to show appreciation to anyone who did anything for her. Albirtha enjoyed bowling, traveling, shopping Reality TV, action movies (kick butt movies as she called them), good music and a good movie. She also enjoyed spending time with her family and reading her bible. Mrs. Albirtha Winters leaves to cherish her memory: daughters, Brenda Winters and Anita Gibson; granddaughters, Deva James and Nicketa (Edwin) Perry; great-grandsons, Edwin Perry II, Adrian White Jr., Jaylin Perry and William Wright, all of Flint; sister, Dora Graves of Leland, MS and Mildred (Bobby) Leflore of Flint; a host of nieces, nephews, other relatives and friends including longtime friend, Mrs. Lossie Mae Woodley. Mrs. Winters was preceded in death by her daughter, Cheryal “Cherry” Winters; parents, Richard and Odessa Smith; sister, Ruby Langston; brother, Robert Lee Smith. The family of Mrs. Albirtha Winters acknowledges and appreciates all of your kind words, prayers, support, visits, calls, cards, floral arrangements and all other expressions of concern that you have shown during our time of bereavement. May God bless each of you. Special thanks to Ascension Genesys Hospital 3rd & 4th Floor physicians, nurses and staff. A very special thank you to Anthony Ray Dunn Sr. for being there for his Auntie, Agness Shackleford for always keeping her beautiful, Tonya Allen and Ro Brown (straight out of the kitchen) for providing the food.

The family of Mrs. Albirtha Winters created this Life Tributes page to make it easy to share your memories.

Send flowers to the Winters family.