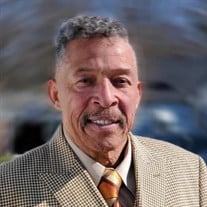 GIVENS, Mr. Adam Lee Sr. - Age 73, passed away Sunday, April 10, 2022, at McLaren-Flint. Family hour 11:00 AM Tuesday, April 19, 2022, at Jackson Memorial Temple C.O.G.I.C., 3155 W. Carpenter Rd., with funeral service commencing at 12:00 PM Pastor Elder Kiemba Knowlin, Host Pastor Bishop Jerry Givens Sr., Officiating Pastor James G. Givens, Eulogist. Interment River Rest Cemetery, G-4413 Flushing Rd. Friends and pallbearers will assemble at the church 11:00 AM Tuesday. Mr. Givens will lie in state in the Chapel of Lawrence E. Moon Funeral Home, 906 W. Flint Park Blvd., and may be viewed from 12:00 PM - 6:00 PM Monday with family present from 4:00 PM - 6:00 PM to receive friends. In loving memory of Adam Lee Givens, Sr. also known as “Red”. He was born on February 22, 1949, in Jackson, Mississippi to the parents of Purvis and Ruth Givens. Adam Lee Givens, Sr. departed this life on April 10, 2022, at McLaren Hospital, Flint, MI, surrounded by family who loved him. He attended Jefferson Elementary School, Flint Northwestern High School, and Mott College. Adam later fell in love with a beautiful young lady, Marilyn Brown, also known as “Mum’s”, who caught his eye. They were married and had eight children. He was a retiree of General Motors with 32 years of service. Adam was a member of Prayer Garden C.O.G.I.C. under the leadership of his late parents, Dr. Purvis and Mother Ruth Givens then Bishop Jerry L. Givens, Sr. and Mother Cherry Givens and lastly, Pastor Jerry Jr. and First Lady Joy Givens. He was a retiree of General Motors Corporation after 32 years of service. Adam was well-known and a loving man. He feared God and had strong “crazy” faith. Adam had a heart of gold. He was very intellectual, inspirational, talented and skillful. Adam could accomplish any challenges that came his way. He always kept his word and never made a promise he did not keep. Adam was very respectful, honest and warm-hearted, and had the biggest smile you ever wanted to see. Adam was loved by many and no one was a stranger to him. He would always say “Sugar”- “Stay Happy” and “Stay Safe.” Adam made sure everyone around him was loved and filled with joy. Sports was really his thing. He was a big fan of the Los Angeles Lakers and the Pittsburgh Steelers. Adam played every sport you could think of, baseball, football, basketball, soccer, roller skating, just to name a few. He also loved music; spirituals and jazz were his favorite. Adam loved watching movies and television shows such as, In the Heat of the Night, Colombo, Westerns and movies like The Godfather, The Untouchables and all Denzel Washington’s movies. Adam was a talented musician. He played the drums and sometimes sang with his mother and sister in church. In 2016, Adam gave his life to the Lord and accepted Jesus Christ as his personal savior. He became Minister Adam Givens, Sr. and Oh Boy, how he enjoyed being a part of the church. Adam really enjoyed testifying about the goodness of God and how God delivered him from drinking and smoking. It was a joy to hear him tell how many years he was sobriety free. Adam served God to the utmost making up for lost time until he departed this life on April 10, 2022. Adam Lee Givens Sr. leaves to cherish his memories, a beautiful loving wife, Marilyn Givens of 53 years; sons, Adam Givens, Jr., Kolan (Renae) Sparks, Robert Givens, and Terrence Givens; daughters, Adrianna Parham-Givens, Antoinette Givens, Jacqueline Givens-McBride, Monica Lee-Givens (Maurice), Monique Givens (Delano), Sherry Givens (Tim), Tamiah (Robert) Jones, and Yolonda Givens-Henderson (Jobey); brothers, James (Marie) Givens, Jerry Sr. (Cherrylean) Givens, Purvis Givens, Terry Givens and son, Terrel; sisters, Beverly (Maurice) Davis, Deborah Robinson, Phyllis Jones and Ruth A. Givens; along with a host of grandchildren, great grandchildren, nephews, nieces, friends, and many special friends including, Larry Stribling and Cantrell. Adam was preceded in death by his father, Dr. Purvis Givens; mother, Mother Ruth Givens; grandmother, Ada Givens; grandfather, Lenwood Givens; brother-in-law, Derrick Jones; grandson, Devante Hanson; and granddaughter, Jassmine McBride.

The family of Mr. Adam Lee Givens Sr. created this Life Tributes page to make it easy to share your memories.

Send flowers to the Givens family.