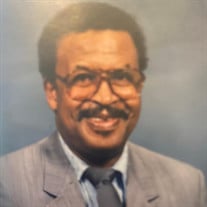 MASTIN, Mr. A C - Age 90, passed away Friday, June 18, 2021 at his residence. Family hour 10:00 AM Wednesday, July 14, 2021 from the Chapel of Lawrence E. Moon Funeral Home, 906 W. Flint Park Blvd., with funeral service commencing at 11:00 AM. Pastor Patrick W. Sander II officiating. Interment Gracelawn Cemetery, 5710 N. Saginaw Street. Friends and pallbearers will assemble at the funeral home 10:30 AM Wednesday. Mr. Mastin will lie in state in the Chapel of Lawrence E. Moon Funeral Home, and may be viewed from 12:00 PM - 6:00 PM Tuesday. There are reports of lives so changed, so transformed into a new person. So, with AC, who one day saw light, this Light was Jesus. The other day, the Light called him home. Mr. AC Mastin was born July 31, 1930 in Belle Miner, Alabama, the son of Wesley Sanfur and Minerva Mastin. When AC was 3 years old, Lewis Randolph Sr. and Minerva Mastin got married and the family moved to Leighton, AL. He confessed a hope in Christ at an early age and joined the Galilee Missionary Baptist Church, singing in the choir, and was a Happy Hitter’s gospel singer. AC attended Leighton Training School where he loved to compete in track. He was a Jack-of-All-Trades, being able to create all things he set out to do. In 1953, he came to Flint, Michigan seeking work at Buick City, a division of General Motors Corporation. AC united with Antioch Missionary Baptist Church where he sang in the choir. On June 6, 1954 he married the love of his life, Edna, celebrating 67 years of marriage and after dating 4 years which made 71 years together. He had a way with his grandchildren, great-grandchildren, nieces, nephews and god-children, to make them think they were special and his favorite one. In 1957, he helped organize the Mighty Wind Spiritual Singers, and he sang lead baritone while traveling. They were on stage with the Mighty Clouds of Joy. The late Reverend L. W. Pryor sent AC and Edna to Ebenezer Missionary Baptist Church where AC sang in the Inspirational Choir, Male Chorus, drove bus tours and helped build the Baptistry. It was there that he met his friend Rev. Jo Ann Carrigan who kept in contact with AC through the years. Every time he went to the hospital or even was sick at home Jo Ann would call. The last time she called he whispered “I can’t sing”, but then he tried. He fought a good fight and had a lot of pain. AC was a member of Beacon Light #10, Eureka Grand Lodge in Detroit, MI and was also a Shriner. He also drove for Flint Charters and was a self-made barber from the age of 16. He was loved by all and will be greatly missed. Mr. AC Mastin leaves in care of his Heavenly Father: wife of 67 years, Edna B. Mastin; 2 sons, Maurice A. Mastin of Flint and A’cdric J. Mastin of San Diego, CA; granddaughter, Olivia Mastin of Port Huron, MI; 4 grandsons, Anthony O’Boyle and Andre’ Mastin, both of Chicago, IL, Simba and Safari Mastin, both of San Diego, CA; daughter-in-law, Yoishiea Mastin of San Diego, CA; mother of his three grandchildren, Kristi Thomason of Port Huron, MI; brother, Pastor Emeritus Lewis Randolph Jr.; 4 sisters, Ollie Mae Hudson, Catherine Thomas, Betty Walker and Geneva Eberechuku, MI; two sisters-in-law, Irene Bates, of Flint, MI and Ruth Flynn of Decatur, AL; one brother-in-law, Edward King; a host of nieces, nephews, other relatives and friends. Mr. Mastin was preceded in death by his parents, Wesley Sanfur, Minerva and Lewis Randolph Sr.; sister, Cornelia Jackson; brothers, Nemiah Mastin, James Mastin and Johnnie Mastin; five aunts; five uncles; two step-sisters; and one step-brother. The family would like to express special thanks to Pastor Patrick W. Sanders II and Ebenezer Ministries, Dr. Kena Powell, Pastor Chris Taylor and the Antioch Missionary Baptist Church, Mary Callaway and Lawrence E. Moon Funeral Home.

The family of Mr. A C Mastin created this Life Tributes page to make it easy to share your memories.

Send flowers to the Mastin family.